Need education around marketing attribution? We have you covered.

How is DTC Advertising Spend Changing in Response to COVID-19?

How is DTC Advertising Spend Changing in Response to COVID-19?

Rockerbox is leveraging its unique dataset of digitally native companies to help you better understand the impact of COVID-19 on ad spend. For an in-depth look at revenue by vertical, check out our daily DTC revenue tracker.

How is spend changing?

To understand how spend is changing, we started by looking at how Rockerbox brands have adjusted spend. We used a pre-COVID-19 time period as a baseline and calculated the change in spend during the average week in each temporal period (pre-COVID versus post-COVID).

Below is the distribution describing the changes that have taken place during this time period. 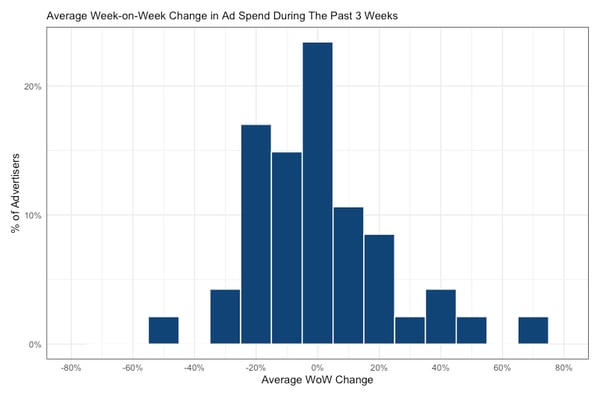 From the distribution above, we can see that two-thirds of advertisers have responded to COVID-19 with caution. They have either decreased their weekly ad spend or kept it steady during this time period. Still, approximately one-third of advertisers have increased their investment in marketing, by either restoring their ad spend back to its baseline or capitalizing on COVID-19 trends that are favorable to their businesses.

Why are advertisers adjusting budgets?

The macroeconomic impact of COVID-19 cannot be overstated as the main driver for ad spend reductions. Businesses are trying to maintain profitability through uncertain times. Since COVID-19 has had a significant impact on consumer behavior (and consumer spending), we expect ad spend decisions to be highly correlated with changes in revenue.

In this analysis, we have decided to look at revenue changes versus spend changes to fully understand:

To perform the analysis, we created standardized figures for revenue and spend respectively. This transformation has two main advantages:

The graph below shows the distribution of normalized spend (top left, red) and revenue (bottom right, blue), as well as their relationship (bottom left) in the past 10 days versus the normalized baseline. 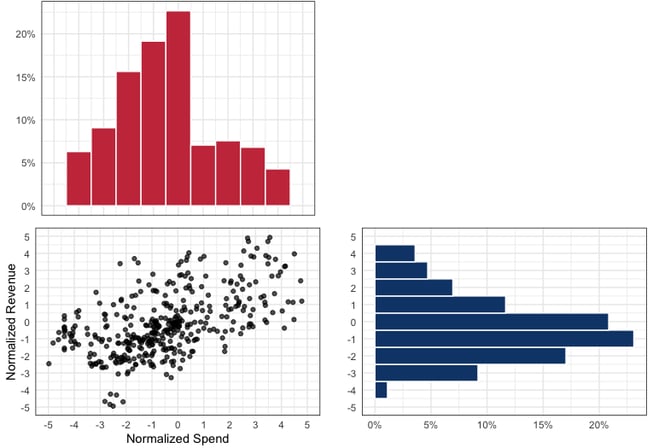 The changes companies have made in response to COVID-19 and the resulting market conditions have clearly been varied and clearly correlated with spend.

Consumer behavior (and the resulting purchases they make) is largely outside of the control of individual companies. It's important to understand the scope and change in how this behavior has changed. Specifically, to summarize the above revenue distribution:

As shown in our daily analysis, these shifts in revenue are very vertical dependent and help to explain why there is a distribution of outcomes. See here for more details on how we have seen revenue shift.

Unlike revenue, marketing spend is directly controlled by the brands.

Marketers have control over how they respond to revenue changes and the specific adjustments they make to the marketing budget. What we are most interested in investigating is how spend changes relative to the change in revenue. Our expectation would be for an advertiser to adjust spend proportionally to revenue.

For example, when an advertiser:

Below we have plotted the difference between normalized revenue versus normalized spend. The left-hand side of the distribution shows the percentage of advertisers that have decreased spend more than revenue while the right hand side shows spend that is higher than the fluctuation in revenue.

(Another way of interpreting this statistically is to make the assumption that the ideal change between revenue and spend would be one of direct correlation, i.e, y = x. In this scenario, we are inspecting the residuals or how far away each point falls from that line and plotting them.)

The above distribution is skewed towards the left, implying that the relative reduction in spend has been greater that the reduction in revenue. However, this is not exclusively true, and in fact, advertisers have produced a range of responses to changes in revenue.

Below we are going to break down the three scenarios and reactions brands have had to COVID-19 to better understand what data is used to make decisions and infer why these changes to advertising spend are happening.

Digging deeper into companies that cut spend proportionately more than revenue, we want to better understand the actions that are being taken resulting in cases where spend is cut more than revenue.

Specifically, we want to better understand:

The plot below shows examples (pulled from the bottom 15% of the distribution) of companies who have cut spend relatively more than revenue: 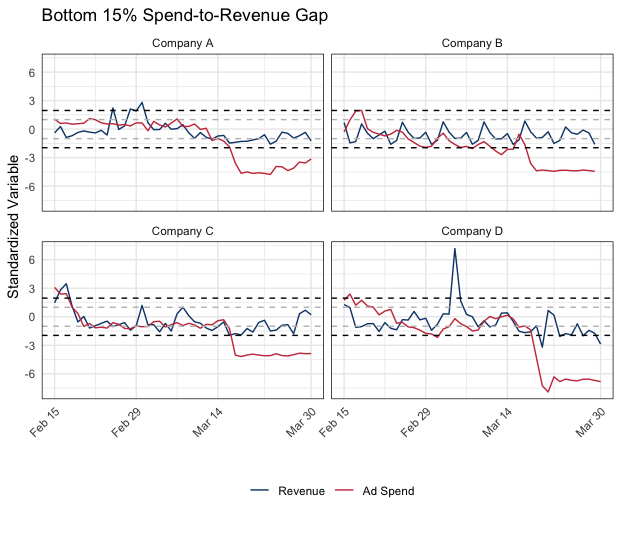 All four of these companies drastically cut their ad spend during the week of March 15th. With the exception of company C, which seems to currently be experiencing a rebound in revenue, those companies’ revenue has since then been stagnant.

Looking objectively at just these metrics:

Companies B and C may have overreacted or predicted revenue would fall further than it actually has whereas A and D likely made the correct decision to cut back on their marketing spend swiftly.

Impact analysis: Companies that have proportionally scaled back spend as revenue has declined

We now turn to the median of our distribution: companies which had changes in spend proportional to their changes in revenue.

This proportionality could be the result of three different trends:

From our sample above, two of those trends are present: companies F, H, and G have had fairly level revenues and ad spends throughout March, while company E has adjusted their spending to match their downwards and upwards trend in revenues perfectly.

This seems to have allowed all but company E to return to the baseline revenue they were accustomed to in February.

The changes experienced by this median group which responded proportionally has enabled them to make gradual spend adjustments and quickly get back to baseline revenue.

Impact analysis: Companies that have increased their spend to revenue ratio

We finally take a look at companies where spend is outpacing revenue. Companies with a high spend-to-revenue difference may have either:

We would expect companies which have increased spend relative to revenue to have had a smaller decrease in revenue than those who did not (though this is likely also influenced by their vertical’s position during a downturn such as this).

Companies which have maintained spend despite revenue loss should have a less gradual decrease in revenue than companies which cut it drastically. 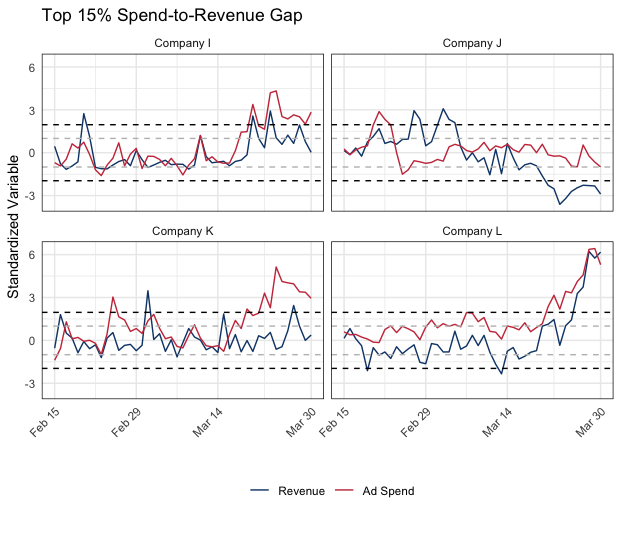 Companies I and K both increased their ad spend as revenue accelerated. As a result, company I had a clear and sharp increase in revenue, while company K’s revenue kept at around its baseline, with no noticeable ‘COVID’ dip.

Company L kept its spend above the baseline throughout February and March 2020. In mid-March, they increased their ad spend and their revenue increased correspondingly, leading to well-above average revenue by the end of March.

Company J kept its spend level despite a decrease in revenue due to COVID-19. This strategy seems to have yielded a weak late-March rebound, which remains unfortunately 2 standard deviations below from their baseline.

We anticipate that companies I, L, and K will have strong performance in their business and on their marketing while they deal with COVID-19.

In comparison, we believe that Company J should be acting more quickly to proportionally match marketing spend to revenue.

The most common response DTC advertisers have taken to declining revenue has been to cut spend proportionally more than the decrease in revenue.

40% of the advertisers tracked have taken this approach, likely keeping only the most efficient marketing in the mix.

Although the actions of these companies may look dramatic, they have likely made the correct business decision for their business in the short-run — increasing margins by paying less per acquired customer.

44% of DTC advertisers have been able to balance marketing budget cuts proportionally with revenue or have not seen revenue significantly decline and have kept marketing spend constant.

We believe that the companies that have been able to take a measured approach to marketing and have scaled their marketing budgets to match revenue are best positioned to recover quickly and capitalize on marketing opportunities that will drive meaningful revenue growth.

27% of DTC advertisers have increased their marketing spend ratio during this time. The two scenarios that are producing this result are advertisers who have chosen to either:

The last bucket has two very different company types in it so we will address these independently:

Overall, we believe marketers have acted rationally in response to very quickly changing market conditions. Even more specifically, we believe that the advertisers who have taken the most measured approach to cutting budget will have the most success over the long run as they have been able to nimbly navigate and invest in marketing relative to revenue.

For daily updates on revenue by vertical,
check out our Daily DTC Revenue Tracker.

As the year is winding down, it’s the season of recaps, wrap-ups and best-of guides, but it’s also the time to set our v...

Holiday Marketing: It’s Not Too Late to Ensure the Optimal Channel Mix

The holiday season is rapidly approaching, and with increasingly volatile performance across paid media channels like Fa...

We recently recapped our webinar with Portage Ventures on marketing attribution in Apple’s new privacy world, but the wh...

Get all recent posts to your inbox.

Keep in the loop of all things marketing attribution. No spam.