We hear from customers all day that they’re looking to expand where they’re buying. Facebook and Google continue to get more expensive as the competition heats up. Now, traditional channels that have been underappreciated in the digital age (e.g., direct mail, TV and radio) are becoming more popular as a way to stand out. (At Rockerbox, we refer to any channel that can’t be measured via UTM parameters as a “non-UTM” channel).

Direct mail campaigns might be used to re-engage existing customers or as a way to prospect for new customers. Either way, there are different formats that are commonly used:

1) Postcards: Clear, concise and simple – these are typically used for special offers.

2) Leaflets & brochures: These include more details about your brand as well as visuals. Because they’re more detailed, they’re usually a good fit for prospecting campaigns.

3) Catalogs: Though the most expensive, these tend to have high engagement rates and are also ideal for prospecting.

4) Shared Mail: Ever receive nice bundle of coupons from local services in your neighborhood? This is a shared mail campaign. It’s most cost effective because it allows advertisers to share the cost of mailing.

Now that you have some clarity on types of direct mail, how do you determine who should be targeted for a campaign?

1) People who have converted on your site: This scenario is the easiest because you likely obtained their address when they purchased on your site.

2) People who have visited on your site, but haven’t converted: In this case, you haven’t obtained anyone’s address — attribution vendors will often rely on data providers to figure them out.¹ As you might have guessed, this is the part of a direct mail campaign that raises some eyebrows.

3) People who look like people who converted on your site: You might also build a lookalike audience based on those who have already purchased from you.² You definitely won’t have the addresses of these people — this is also when vendors will rely on data providers.

How do you know if your campaign is working?

Setting up a direct mail campaign requires setting up tracking methods. These may take the form of coupon codes, unique website URLs, trackable phone numbers or QR codes on every piece of mail.

A conversion from one of these tracking methods is easily measured and a clear indicator of success. The person received your promotion, became interested and acted (similar to a post-click conversion).

The problem? Conversions from tracking codes aren’t always the norm. Many people will take a quick look at your mail, toss it aside and make an online purchase later on (similar to a post-view conversion). This is where a matchback analysis becomes useful. 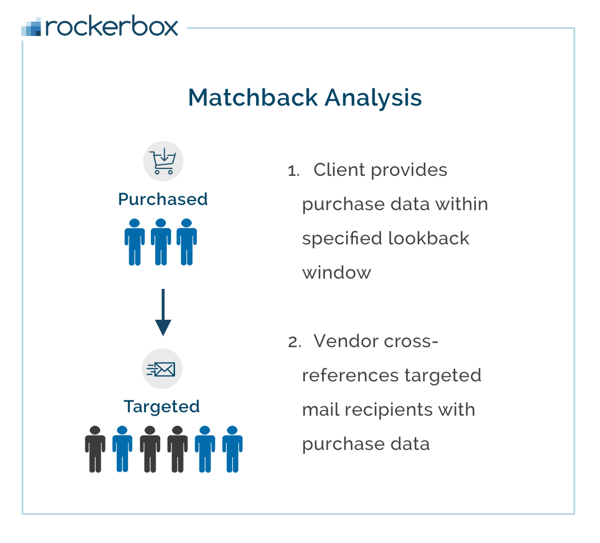 One variable to consider is how much time you give in between mail being sent and purchases being made. If you mailed someone in January and they don’t buy until March, does it count? Thirty days is a common lookback window, but this varies depending on the type of mail you’re sending and the data you already have.

One downfall running a matchback analysis is that not all your site visitors convert. If someone came to your site after receiving direct mail but never ordered something, how can you connect those dots? The short answer is there isn’t a perfect way. These people usually won’t be able to be tracked.

How direct mail fits into the rest of your marketing

Once your attribution provider figures out who received mail and converted, a direct mail touchpoint will be added to the customer’s existing path to conversion. It might look something like this:

Once you have the ability to measure your campaigns, you can start to optimize them using the data you’ve gathered. Whether you’re optimizing based on the type of mail you’re sending or who you’re sending it to, you may soon realize the potential of direct mail as a high-ROI channel.

Going Beyond Facebook and Google Measurement for DTC Brands